~about the Elysium Nights~


As I already announced here, the first edition of the Elysium Nights took place last weekend. I went there together with some friends and I have to say: I really enjoyed the evening. It already started the day before the actual event, when I printed my ticket: I was number 1! The first sold ticket! I don’t know why but this kind of made me very happy^^

When we arrived there around 21.00 I think it was, we first had some problems finding the right entrance because the ball was situated in the basement of a normal restaurant and you had kind of scurry trough the normal entrance where the “normal” guest sat in the main room and then downstairs to the room that was booked for the event. (Maybe a sign at the door would have been helpful, because you know: if you are really dressed up you don’t want to enter a normal restaurant filled with people for no reason, it’s kind of awkward^^).

Down the stairs we handed in our print-out tickets and got the real ones. The first 50 bought tickets got a little present. Here’s mine: 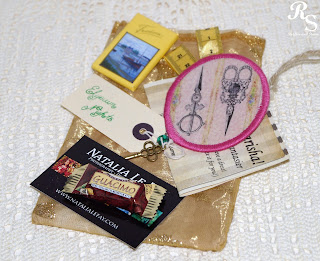 I think it’s absolute adorable! Marina and Natalia really put a lot of work into this!
(Since the presents were packed in glittery bags my camera still has some glitter on it which reminds me of the great evening^^)

In the front area Natalia had set up her photo space and also the vending displays were there (from Merry Me as well as DeadDoll's Needful Things)
Right when we arrived a lot of people we know were already there so we needed quite some time to get in the back area where the cloak room was because of all the “hellos”.
The location itself was decorated with ivy leaves and lights to evoke the look of a grotto, which the arches supported, too. Since it was the basement the ceiling was a bit low and with all the people in there you better not have claustrophobia (but you could still get into the front area where it was not that crowded^^). 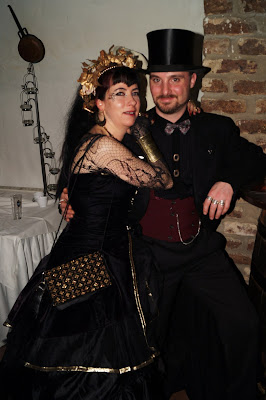 In the beginning of the evening you could have your picture taken from Natalia, which we all did, here are the results:
I really like how they did come out! I have to admit, that I, personally, like them more then the pictures of Gala Nocturna, Viona takes. (Although they are great as well^^)
(You can find photos of the other guest here on Natalia's website and here on facebook.)
They also had prepared a program including the magician Andreas Steverding, a burlesque feather fan dance by Gia LaFae and a fashion show by Oh!Marisha.

Honestly I only really saw the dance (which was great!) because (due to some problems with the technology) they did not really announce the different proram points and so I just missed them because I was in the front part, getting something to drink (with the ticket you got two free drink vouchers, which was great especially for me, because I often don’t drink enough if I have to pay every single drink *stingy-me*). Also it would have been better to have a proper stage but the location itself just didn’t gave the opportunity to set up one, but for the next issue that really something to keep in mind if changing the location.


During the whole evening the two DJs DJ XLII and DJ Tom Noir made a good mix of spherical and danceable music. It might not have been everyone’s favorite but it really fitted the occasion.
Now onto the visitors: everybody looked splendid! A lot of afford was put into the styling and so the outcome was overall awesome! A lot of hoop skirts and corsets, piled up hair and creative make-ups all over the place. It was a joy just to watch the other visitors and I am really amazed in which dresses some of the ladies were still able to dance in! 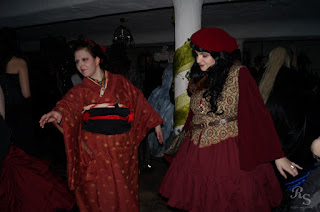 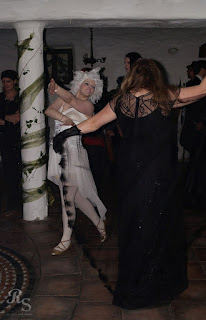 Overall I really, really liked the event! It was the first time it happened and there are still little things that can be changed (like more places to have a seat, better lightning for the displayed pictures of Natalia, which were great, but really hard to see, things like that) but I am absolutely impressed what the two girls made happen and I’m really looking forward to the next edition that hopefully will come!