~about the Spymuseum and my Air Kraken Day~


So last Sunday (17th March) was Air Kraken Day. As I already told you, my local Steampunk group had a meet-up:
(It was kind of  "the day of the Steampunk meet-ups, because in Germany and Switzerland there were four at the same time! If you want to read about the other ones (and understand German) you can check the Clockworker for it.)

We meet at 11.15 at the Brauhaus Zeche Jacobi in Oberhausen. Luckily I had a table reserved for us because the restaurant was really full! Originally 13 people were at the list for the event, but we ended up being 17, so it was a bit cramped at the table, but nothing we couldn’t handle. We had an awesome lunch and dessert and coffee afterwards and spent almost three hours at the brewhouse. We changed seats every now and then (mostly when some of the guys went outside for smoking^^) so you had the chance to talk to everybody.

Our waitress was so kind taking a group picture, which you can see at the beginning shortly before we left. (Unfortunately one is already missing here.)

We only had to walk some few meters to get to the Spy museum. But since the brewhouse and the spy museum are located at the CentrO Oberhausen which is a huge shopping mall with different museums around it, it was very crowed even on a Sunday. Especially families which wanted to go to the cinema, Legomuseum or Sea Life so we had to stop quite often to answer questions about our appearance. Three guests left us here, so we were 13 Steampunks left, that visited the museum.
At the museum itself we split into smaller groups. Honestly: I LOVED the museum. The concept is really great, for adults as well as or children. You learn something about the history of espionage, agent services, prominent spies, spy movies, internet spies, and so much more. There is a lot of stuff you can try yourself, like Morse code, or brake a safe, night vision gear and so on. If you ever come to Oberhausen you should really visit that museum, it’s totally worth it!

Funnily our group reunited at the museum shop at the children’s toys^^ They had golden guns, for 2€… An opportunity a crafty Steampunk will not miss (I bought two myself^^).
After that we bid farewell and headed home.
Since it was Air Kraken Day I had to take some pictures with my krakens, and pictures of other people with my krakens, AND some sky watching pictures^^

Hilde, MaRy and I had decided before to dress up together and take some outfit snaps, which I don’t want to hold back. Here's Hilde's entry for Air Kraken Day.

Unfortunately Mary forgot to take an outfit snap but at least she made a photo of her krakens having pizza^^.

Since I like to give away some of my krakens, I like to present them to you with their new owners ;)

I hope you all had a great Air Kraken Day!
You can find more pictures of the meet in my flickr-album.
Posted by rufflesandsteam at 3/21/2013 3 comments:

~about the Air Kraken Day~

Dear Followers and those who may have stumpled upon my blog: Today is Air Kraken Day (yes and also St. Patrick's Day). So my krakens and me wish you a

So watch the skies as the Great Northern Air Kraken return to their nesting grounds.

You don't know what Air Kraken Day is?
Well it's kind of a Steampunk Holiday established back in 2007 in the Brass Goggles Forum. It's always on March, 17th.

Tinkergirl gave some further information about the subject at Brass Goggles:


Some of you may be aware of the scourge of the skies – the deadly Air-Kraken.  Though Sir Arthur Conan Doyle wrote of them (The Horror of the Heights), and the whole ecology supporting these sky based terrors, they seem to have been mostly forgotten about.  Well, with March being the height of their mating season, it’s as good a day as any to look warily to the skies and remember the mighty Air-Kraken.
It is of course, St. Patrick’s Day also, so perhaps you’ll take a glass or two of whatever tickles your fancy, and look to the skies to see if you might by chance spot an Air-Kraken flitting between the clouds – it’s probably the very best time to do so.  Current theories believe them to be either semi-transparent and made from mostly aerogels, or alternately colour-changing like water-based squid and supported aloft by sacs of hydrogen.

And as the Clockworker lets us know even Wikipedia has knowledge of the  Atmospheric Beasts.

The Telegraph UK even gave a proof of Air Krakens existing! 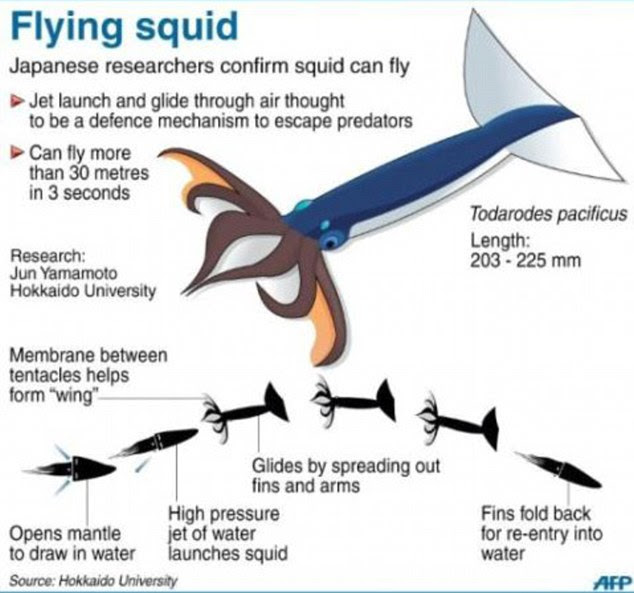 But what do do today?
You decided wether you hide from all the beasts floating around the sky OR you grab your pet kraken for a walk like me and my friends Hilde and MaRy. We decided to dress up for the occasion and as luck would have it my local Steampunk group has a meet-up today ;) (I'll show you the pictures later ;) )

If you are interested in krakens, octopus, squids etc. you might like Hilde's and my joined Tumblr: Air Kraken Adventures. We post a lot of our own krakens there but also other awesome kraken related stuff, so feel free to have a look.

I'm interested what you did today. Anything Kraken related? Or more sympathy for St. Patrick's Day? Or just a normal Sunday?


BCM is a free online magazine about Japanese Culture, including fashion, music, etc.

The current issue is dedicated to Steampunk as it’s on the skids in Japan. There are many interviews inside with famous Steampunks such as Japanese band StrangeArtifact, Mr Brian Kesinger: the talented artist behind the famous duo Otto & Victoria AND: 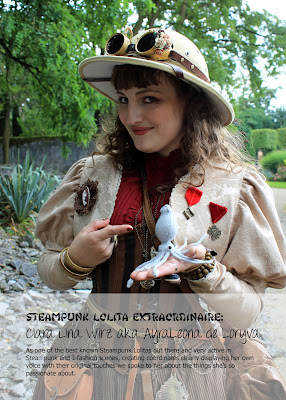 I’ve been interviewed for the “Lolita extraordinaire” section. I’m really honored to be in there with so many awesome guys! Thanks to Hilde for making this magazine so amazing!

So if you are interested in reading my interview or the others or all; you can download your free version here.

There are also music reviews, event reviews (I wrote one about the Elysium Nights for this issue ^_~), and even a printable card for the upcoming Air Kraken Day which will be on March 17th. So it’s definitely worth reading!
Posted by rufflesandsteam at 3/14/2013 1 comment: