It seems that Steampunk Lolita as a substyle gets more and more popular. Not least with Alice and the Pirates' release of Clockwork Aristokitty (on lolilibrary) in May 2013 it seems like the brands are getting interested in the new substyle.

Now Metamorphose Temps de Filles jumps on that band waggon, too, by releasing their new series "The Wheel of time". 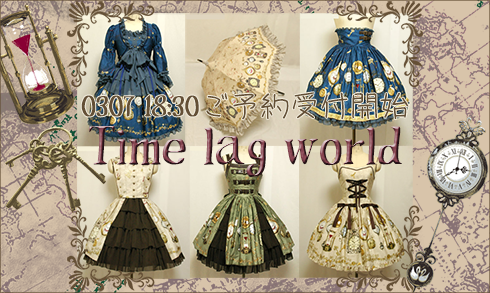 Normally I don't post about brand releases but this one is so damn beautiful, I have to share it!

The reservation starts on March 7th, 2014, 18.30, Japanese time.
The print is as steampunk-y as it can be without including steam engines itself: clocks and watches as a border, together with different smaller keys, then at the bottom a meandering line of gears and cogs, topped by the writing "Metamorphose" consisting of gears, keys and ornaments itself (see picture at the bottom). In the background you can see a map. It will be availible in three colourways.

There will be a onepiece, three JSKs (one more like a jacket) and two skirts (one is the chiffon underskirt for the aforementioned JSKs, the other is a high-waisted one).

That one reminds me a bit of this JSK from F+F's "Time Traveler" series, maybe because of the front buckles... but those zipper details are just awesome! 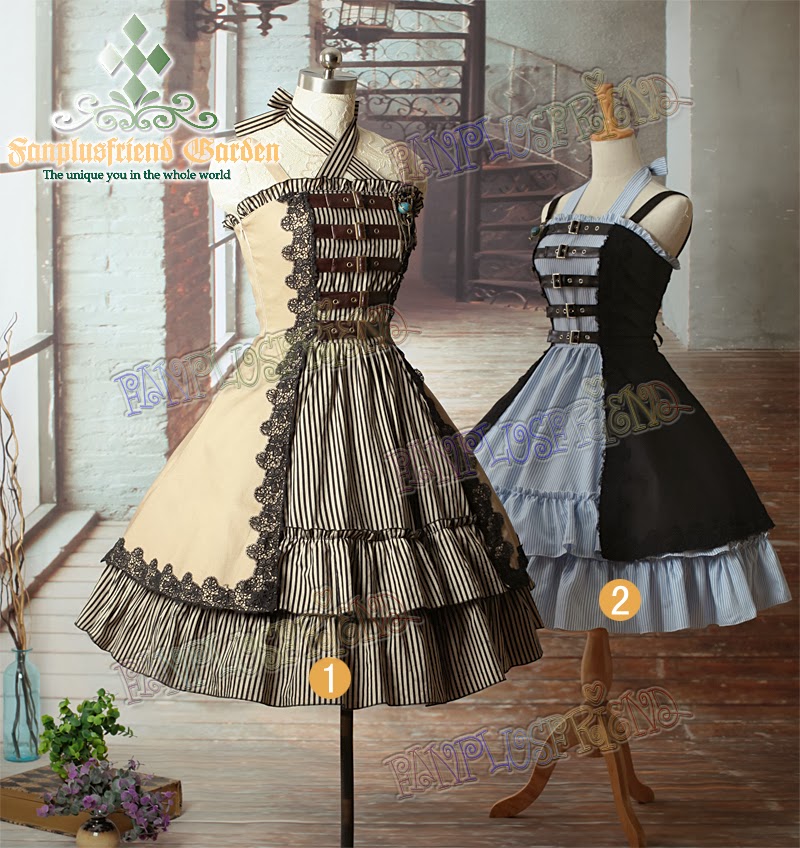 Some details of the skirt: 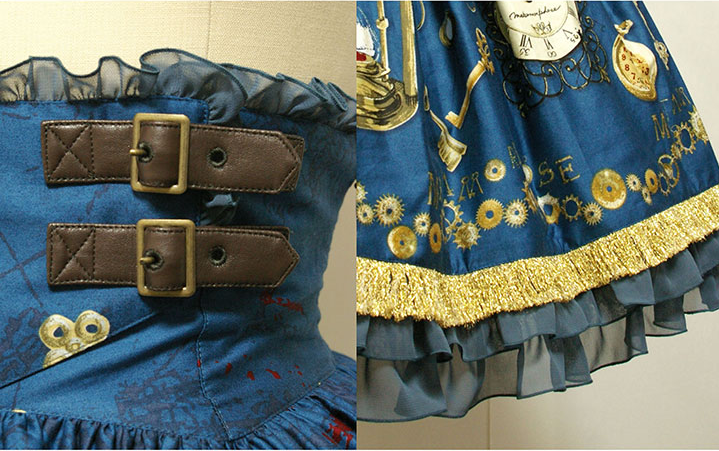 Together with those main pieces go a jacket, a blouse, socks, a half bonnet, a head piece and some ribbons as well as parasols with the same print.
If I had the money, I would get every single piece of that series ^^ All the details, just look at that!

Well, enough of the encomium. What do you think? Do you like Meta's take on Steampunk Lolita? Do you think, that there will be more brands following and release steampunk-y series?
Let me know!

~about an interview with yours truly~

I totally forgot posting about it and I'm really sorry!
But better late then never:

The charming Ray Dean from My Ethereality did a round table discussion with some other steampunks and myself for the Steampunk Hands Around the world.

I had a lot of fun answering the questions and I also enjoy the other's answers. So if you are interested in my point of view concerning steampunk go and read the whole discussion here.
Posted by rufflesandsteam at 2/23/2014 No comments:

Email ThisBlogThis!Share to TwitterShare to FacebookShare to Pinterest
Labels: Aethernet, other blogs, steam 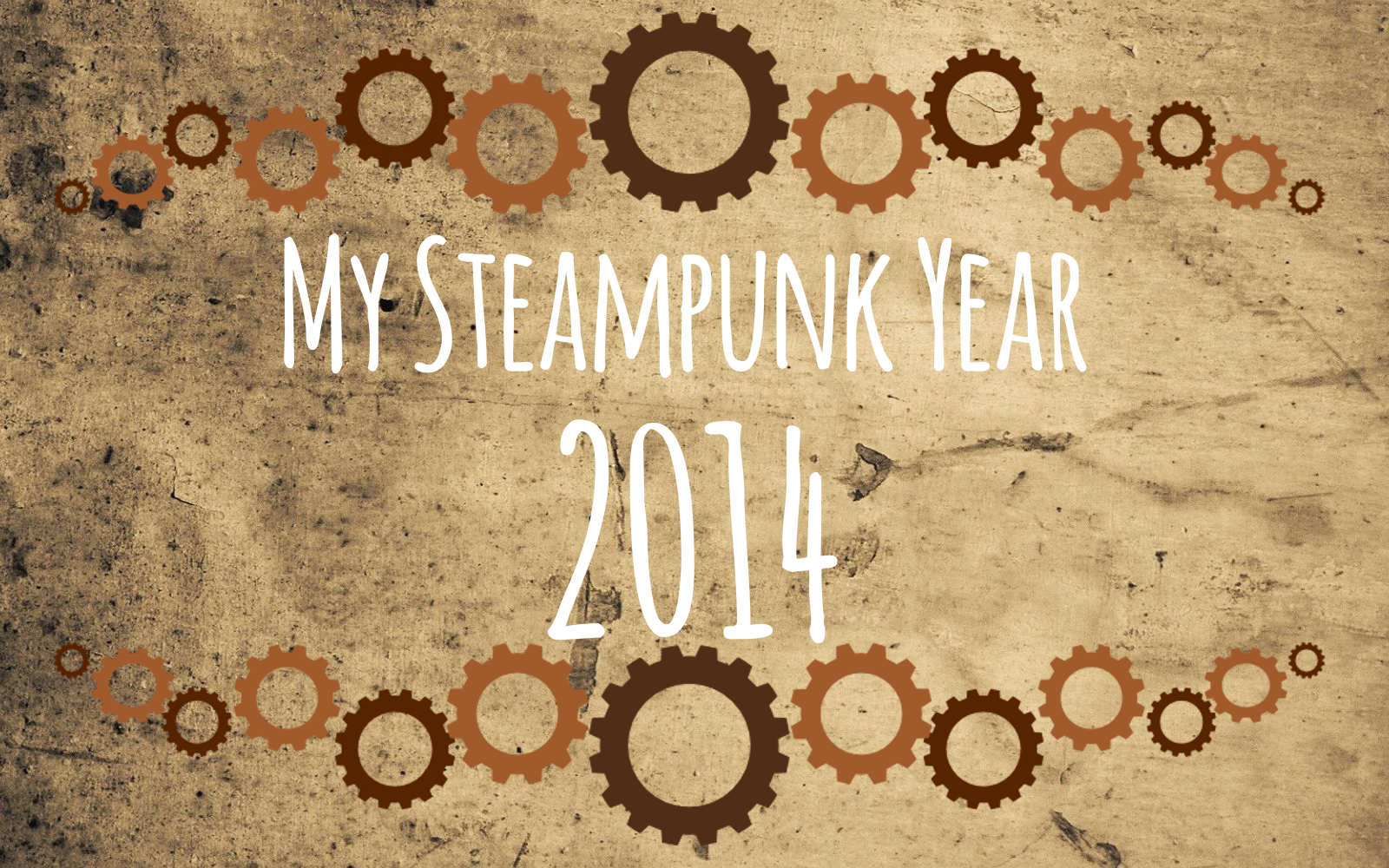 ~about an upcoming album~

They already published the EP "Maschinengeist" in 2012. Back then I did an interview with Felix and Tobias for the Clockworker (in German obviously) and I did some concert photos at the Aethercircus 2013 in Stade. It was a shame they only could play a short set there.
But: I saw them at the Dutch European Steampunk Convention again. (Unfortunately I took no pictures there >_<)

I really liked those performances and I'm looking forward to the album. PLUS I'll be photographing them again on the 22nd of February at the "Metal for mercy". (If you happen to be around, let me know ;) )

Those who read my "thoughts on steampunk music" know that I have a very critical view of the term "Steampunk Music" and "Steampunk Band" (if you haven't read that entry yet, I recommend reading it and please: leave me your opinion there :) ) so in this case we have a band with the steampunk look and steampunk-themed music ;), which I really recommend listing to, even if you don't understand German, the music is worth it!

Well... and now I hush away quietly and wait for the album to be released ;)
If you have any more (steampunk related) music recommandations for me: leave me a comment! I'm glad for new input!

So, as I haven't done a lot of event reviews from the last year I want to give you an overview on what happened (concerning steampunk) during 2013.
As I meet a lot of really awesome people I thought it might be the perfect thing to start the "Steampunk hands around the world" project here on my blog.
(If you've missed the announcement, you can find it here)