So today, 14th June is INTERNATIONAL STEAMPUNK DAY!
Info from the Facebook Group:


"There is International Pirate Day, Ninja Appreciation Day, Dress like a Goth Day and Mock an Emo Day, but there is no steampunk day. I suggest we remedy this and have a offical Holiday where we get to dress up like Steampunk Characters, watch steampunk movies, play steampunk video games, read steampunk books and just bask in the glory that is the steampunk genre. So bust out your goggles and your ray guns, your felt vests and your steam gaskets and imagine a history that might have been...at least for one day."

My octopelius and me celebrated together ;)

We both dressed up for the occassion
(I had to work all day, bit at least at home I could change into steamy clothes^^):
His outfit:
top hat: made by me
My outfit:
Skirt: taobao
corset: restyle.pl
belt: C&A plus added keys
curtain tassel: taobao
blouse: Primark, dyed by me
gloves: H&M
glasses: Vintage
jewelry: Atelier Tausendschön, Six, Poor Man's Gold Label

One event report before my WGT review: 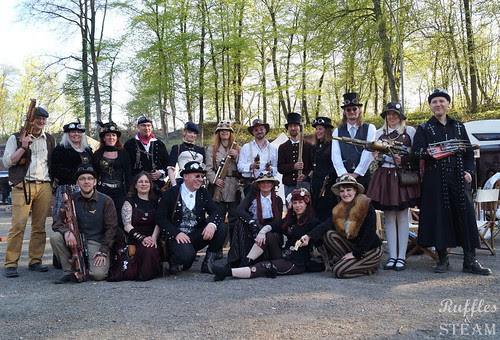 From 3rd to 5th May the Steampunk Expedition Camp set up their tents at the Aethercircus in Stade. The Aethercircus is the first German Steampunk Convention and takes place at the Festung (fort) Grauerort.
After the first try at the last Steamcon Anno 1900 in Luxemburg it was the first real expedition for the S.E.G. (Steampunk Expeditions Gesellschaft = Steampunk Expedition Company).
Our group (Vala, Thomas and me) arrived around 16.30 at the Festung. Nici and Stefan were already there and had set up their Caravan, as well as Jochen (Horatius Steam) had set up his tent. Shortly after us arrived Sylvia and Klaus, so we could discuss how to set up the camp as a whole.
We had some issues with the ground so in the end we used a hammer drill to get the hooks into the ground.
The rest of the Company arrived until 20.00 so we could go buy all the food for the weekend at Stade. Back in the camp we did a barbecue and a lot of other participants of the camp joined our fire.
Saturday was the first day with visitors. Since I volunteered for the Fashion show and had to change clothes around noon I went for a simple outfit first and chose my Victorian Bathing Suit. Since the Elbe was directly behind the fortifications Sylvia, Nici and I decided to do a small photo shot down at the water. We also made a video I call “Victorian Baywatch” (we made a lot of videos that weekend, so I will make a special post just about that).

Diana Bianca from Atelier Tausendschön had a booth at the vendors’ room and so I asked her if she could do my hair again. Not only is she an amazingly creative person concerning her jewelry but also an awesome hairdresser! 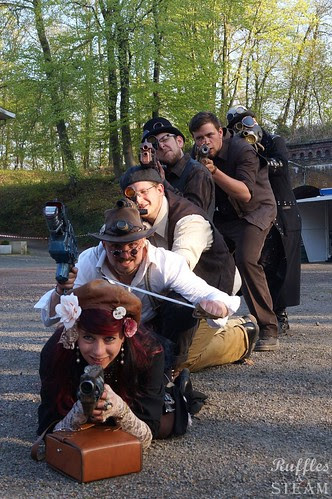 After the fashion show I changed back into more comfy clothes.
Some guys (and girls) of our camp had occupied some big Nerf guns so we decided to do some videos around the fort. We had a lot of fun hijack the entrance cash point or the little train which surrounded the fort. When I’m finished with cutting the videos I will definitely post them here ;)
For the evening we had planned to make a vegetable soup so we prepared the stuff for it. Since we had some drummers as visitors at the camp we used the opportunity to dance around a bit. Claire filmed that and already uploaded it here so enjoy:

Beside the different vending rooms, the organization of the Aethercircus had organized different readings of Steampunk authors and of course also some music acts. My two favorite were Violet SteamExperience (I had already seen in Eindhoven) and Aeronautica with which I’d done an interview for the Clockworker but never seen live on stage until then.
Unfortunately I couldn’t take good pictures of Violet, they all turned out blurry, but the ones I took of Aeronautica are not too bad. You can find all of them on my flickR.
Because of some delays Aeronautica could only play for 25mins instead of a whole hour, which was really a shame because they really rocked! I hope I get the chance to see them a bit longer soon.

On Sunday Nici took my place in the fashion show, so I could wear something more elaborate. Nici and I decided to do a Burlesque/Saloon Girl/Steampunk cross-over together. The guys occupied the Nerf guns again and together we went walking around the event area: The girls and their security team. 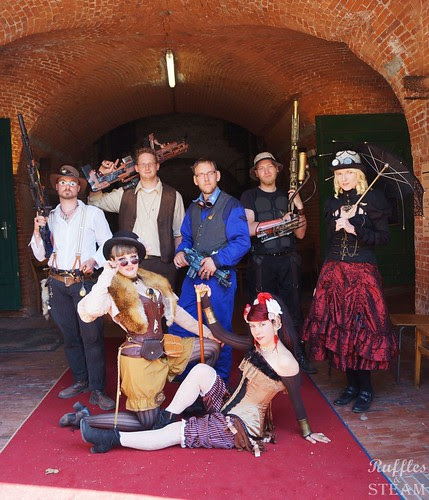 We had a lot of fun, especially because the vendors cooperated and that way we got free drinks at the bar (for example). One pair of shop owners declared themselves creatures of the night and that our normal weapons would not help against them, so we got the vampire hunter kit from Horatius! 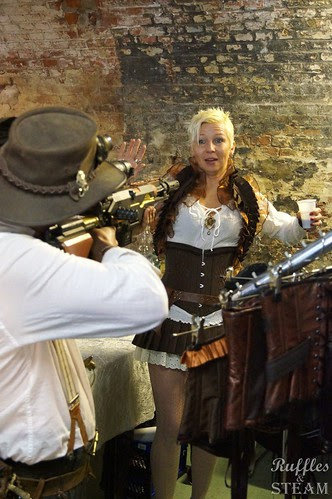 Bianca from Violet filmed us, you can see our operation at the middle of the video (around 4:30)


In the late afternoon it was already time to pack our stuff and leave :(
It was an awesome weekend and I’m really looking forward to the next camp at the Dutch European Steampunk Convention in Meppel (and Aeronautica^^)!

Nikolaus von Krähenfeld started a thread at the Rauchersalon were all the links to photo galleries are collected, so if you want to see more pictures have a look here. The rest of my pictures can be found here.
Posted by rufflesandsteam at 6/05/2013 1 comment: