~about my lolita wardrobe~

So, there's a lolita tradition during January: the wardrobe post on egl. For those, who don't know it: egl stands for Elegant Gothic Lolita but is also a main description of the lolita fashion style in general. The egl community on facebook is one of the most active international ones.

During january the theme is "Wardrobe post" which means that every lolita can post pictures of her entire closet and show off their clothes!

Although I wear lolita since around 2008 I never made a wardrobe post until now. I finally jumped on the band wagon and did:


My Wardrobe
(at least the most part of it)

Since I wear lolita on a nearly daily basis (mixed with mori/dolly kei as well as steampunk elements) I've got a lot of plain pieces. Most of my clothing is off-brand or hand-made, I only got some few brand pieces.
The rest is mainly classic pieces with flower patterns and/or plainer gothic or steampunk pieces.
Since the last two years (at least) I mainly only buy and sew lolita pieces if I can also wear them for steampunk, so my choice of clothes is somewhat limited. But just have a look yourself ;) and tell me what you think of it! (I'm curious)

(And if you are curious what I make out of that wardrobe, you can see some outfits at my daily_lolita entries or at my deviantArt)

~About a world wide Steampunk month~

Steampunk Hands around the World

As I posted earlier this morning at the Clockworker, there's a great project going on in the internatioal Steampunk community right now!

It's called "Steampunk Hands around the World" and that's basically what it really is ^^
I know, sounds a bit akward, so here's the press release for you to understand, what it's all about:

Just as current day expressions of steampunk are not limited to the literature where it began, the people in the steampunk community are not bound to any one geographical region. Steampunk appears in many forms, and with its popularity, the community has grown to encompass the world.

The celebration and sharing of that global association is at the heart of a new project, Steampunk Hands Around the World, by Kevin Steil, the creator and editor of steampunk news and information resource website, Airship Ambassador. With more than three dozen steampunk creators - bloggers, authors, event organizers, and others - also participating, the month long project is a multi format media presentation about the international connections and communications in the community, for steampunks and non-steampunks alike.

Beginning Sunday, February 2nd, and continuing until Friday, February 28th, the group will show and share that steampunks everywhere are linked together and that new friends are waiting in every conversation.

Steampunk, in its many forms, brings people together in an inclusive and helpful network of similar mind. From sharing book and music review opinions, to playing the newest games and sharing DIY information on fashion and props, the steampunk community easily and comfortably brings together people ages eight to eighty in ways not often seen in other communities.

The full and updated-daily list of participating websites, blogs and events will be posted in the kick-off blog on the Airship Ambassador blog site:

Allright, that's the idea. At the moment there's a facebook group, where people talk about the organization, get in touch and get prepared for february, the Steampunk Month. So if you want to join in, too (which I highly recommend) just drop Kevin a line.

There are also several German blogs/websites besides the Clockworker joining in such as Daily Steampunk (who also writes in English), PhantaNews and Wohnbu.de (which will post stuff about steampunk living, I'm really looking forward to that!)

Stefan from PhantaNews also designed a greyscale logo, which I like pretty much, too (but I prefer some colour^^): 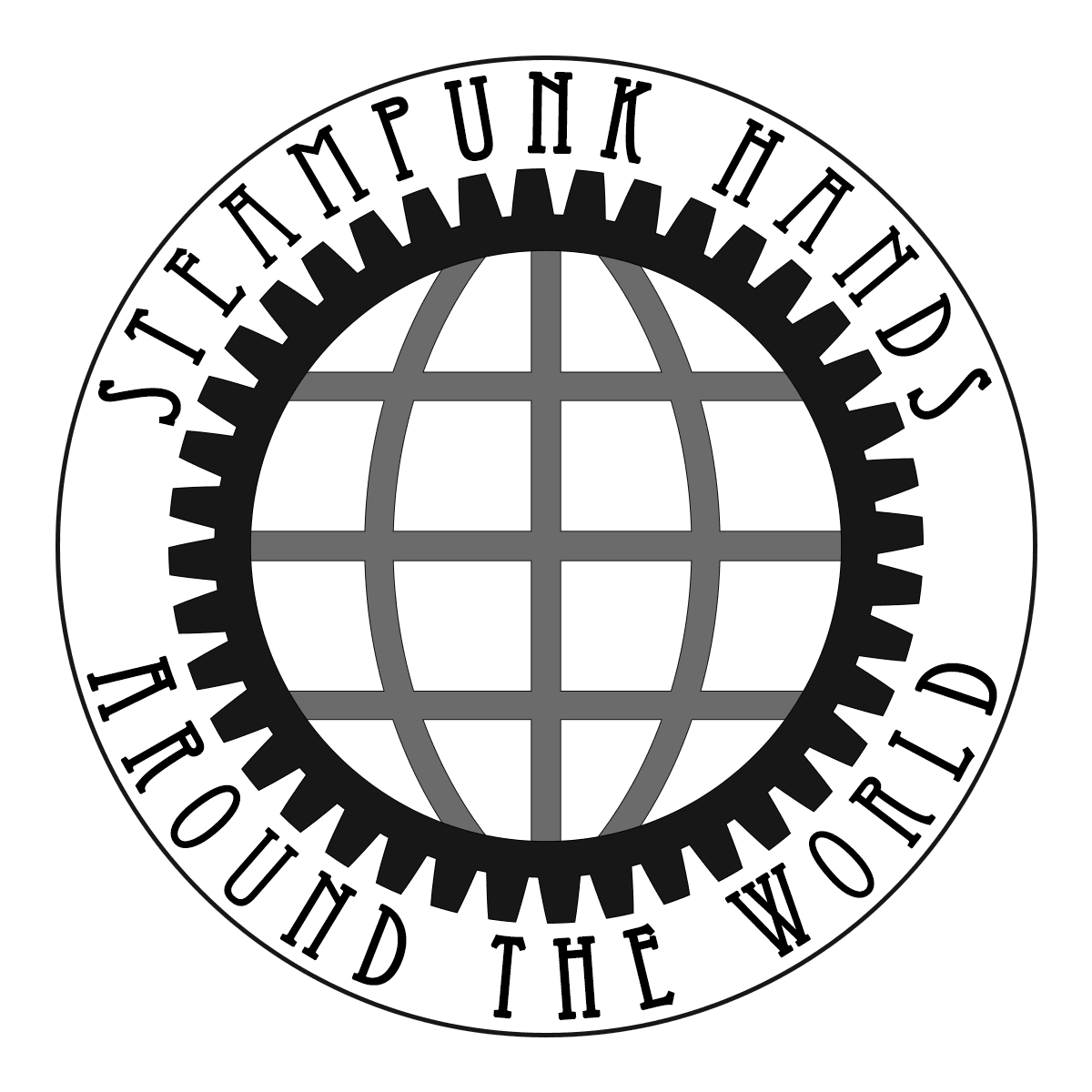 Well then, what will I do for the Steampunk Month...
I want to start with a review about my Steampunk Year 2013, because as you might have noticed, I haven't blogged a lot last year so I want to take the chance to, well, make up leeway.
In addition to that I want to release some stuff together with Hildekitten (website) from Belgium, especially about our experiences working together for several online magazines (her own J-culture magazine BCM, which also includes a lot of Steampunk, the Clockworker and of course the Steampunk Gazette)
We also have some other plans in the making so stay tuned and be curious what will come ;)
(And think about joining in of course!)
Posted by rufflesandsteam at 1/09/2014 No comments: