Okay, finally here we are talking about Wave Gotik Treffen 2014. (I'll do an extra one with my outfits later ;) )


Since last year I get press access to be able to report for the BCM and the Gatehouse Gazette. You can find my reviews at the Gatehouse here and the BCM here (it's #19).


This year I went again with Kitty and Luching and we three also had a flat together. (If you ever want to go to WGT, make sure to book as early as possible! We three are in the same private flat since three years now and we always book our next year, when we leave ;) ) The festival itself is from Friday to monday over Pentecost, but we always stretch our stay from Thursday to Tuesday if possible so it's less stressful driving the 5-6 hours. 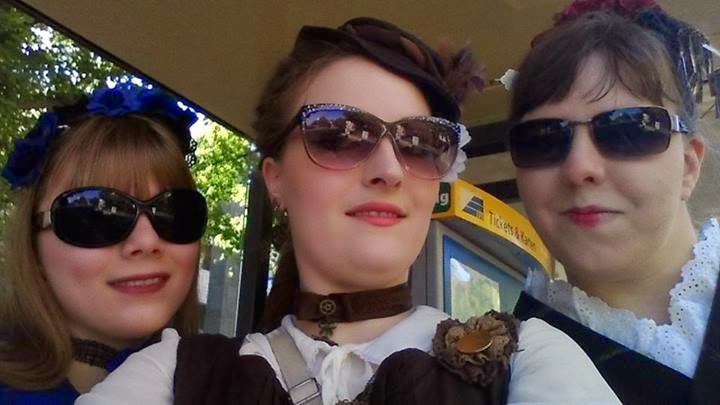 When we arrived on Thursday, we had a lot of fun putting all our stuff together taking photos and asking our facebook friends how many girls we would be at WGT.
The answers differed A LOT! 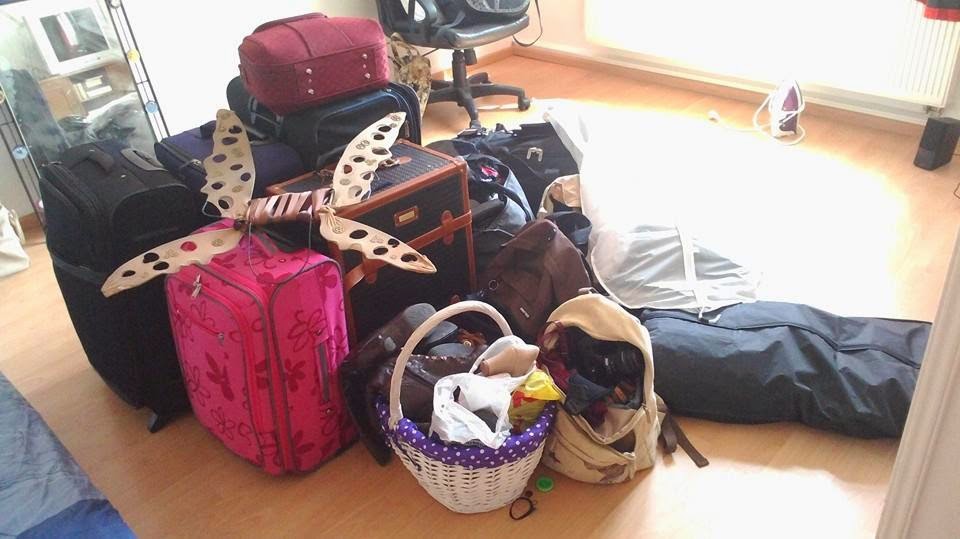 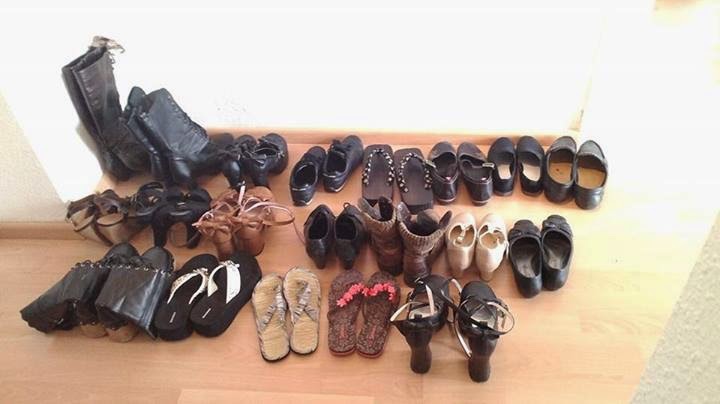 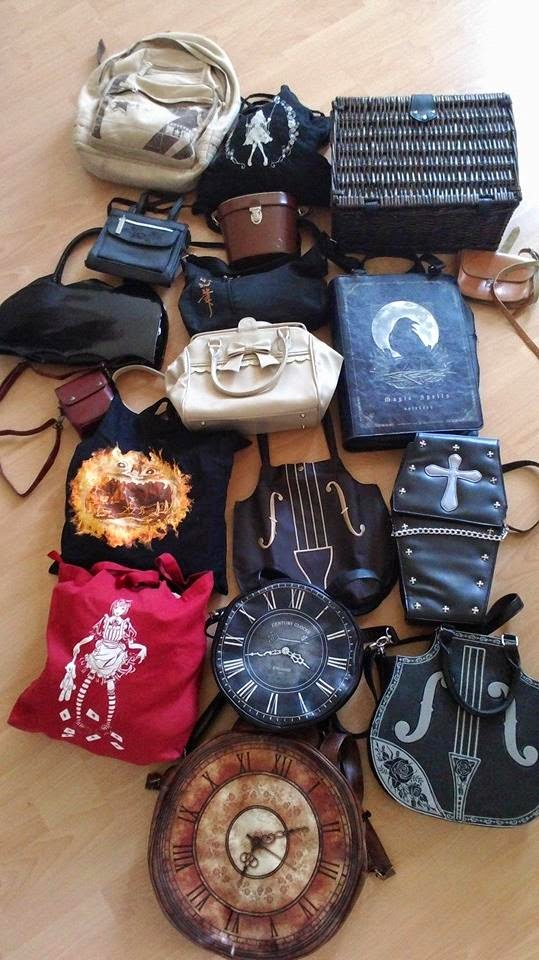 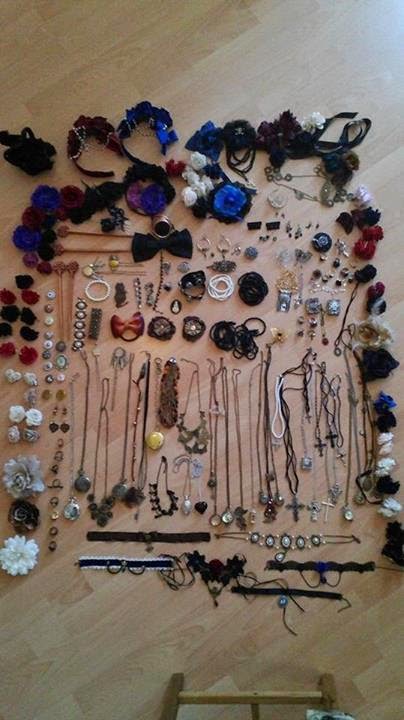 For example when we did a photo of our luggages one of my friends said “That's for six men for a three month polar expedition, or one woman for three days festival”

Well, anyway, we had a lot of fun taking those pictures and reading the comments. Looking at them makes me realize how much I love my big car!

The Friday started with the almost traditional Victorian Picnic organized by Viona. This year I decided together with a group of Coppeliusfans that we would dress up as Victorian servants. Because there are so many Lords and Ladies at the picnic, they can't be without maids and butlers. Although we didn't served much and pretended it was our solemn free day, singing “Diener 5er Herren” (=servant of five Sirs)  from Coppelius a lot. 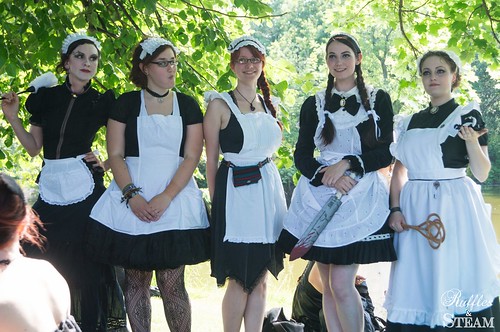 Later on we decided to do something with our outfits and started photobombing pictures with the help of Jesko from dark-pictures.org. He asked good looking folk for a picture and after two normal photos we invaded the scene serving cookies, dusting and so on. The reactions of the people were priceless!

I know that Jesko also took some videos so there might be some video evidence later this month.

On Saturday then the third Steampunk Picnic took place. This year it was organized by Oleander Lindenzweig and me and we changed the location from the rather busy park at the Moritz Bastei to the Park near the Parkschlösschen where we were not invaded by photographers.

Around 150 Steampunks showed up and I really enjoyed the time talking to new and old friends. It was really hot that day (as it was the whole weekend) and so I ditched the shoes at some point and so did others. We tried to stay in the shadow of the solemn trees available. 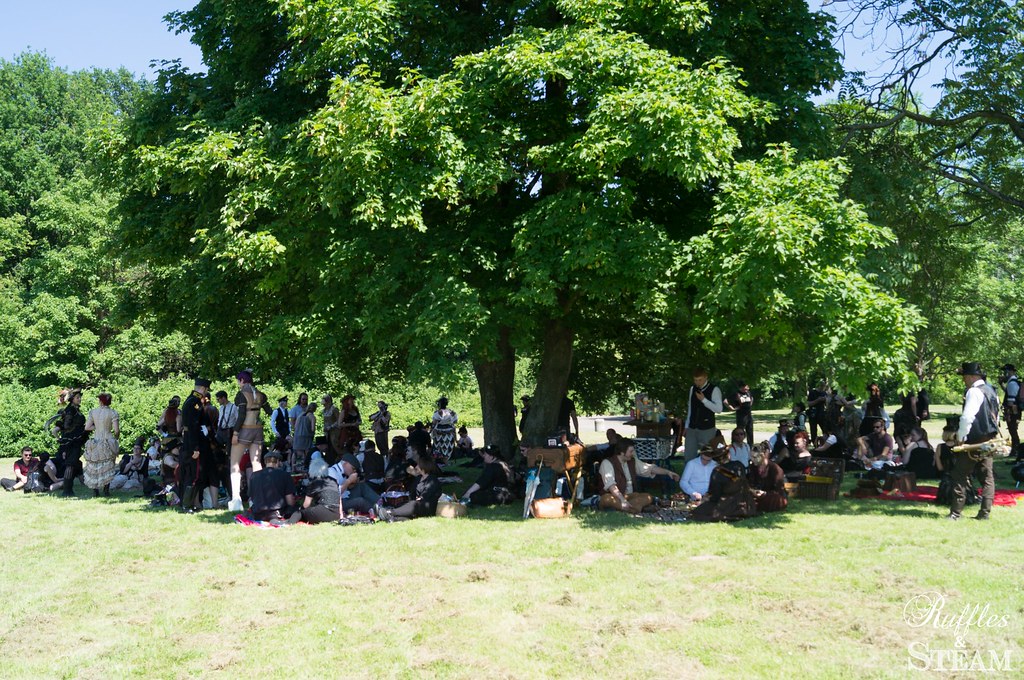 Our Sunday started with a relaxed breakfast at the Absintherie and Soup-Bar. Afterwards we to the city, first visiting one of the many exhibitions and then we went to the lecture of Christian von Aster.
Unfortunately there were some problems with the press access at the cinema where the lecture took place. They said that paying visitors should be let in first, but at the lectures of Aster there are always too many visitors, so if you are late you won't get a seat, so saying paying visitors first means that you won't get a place... 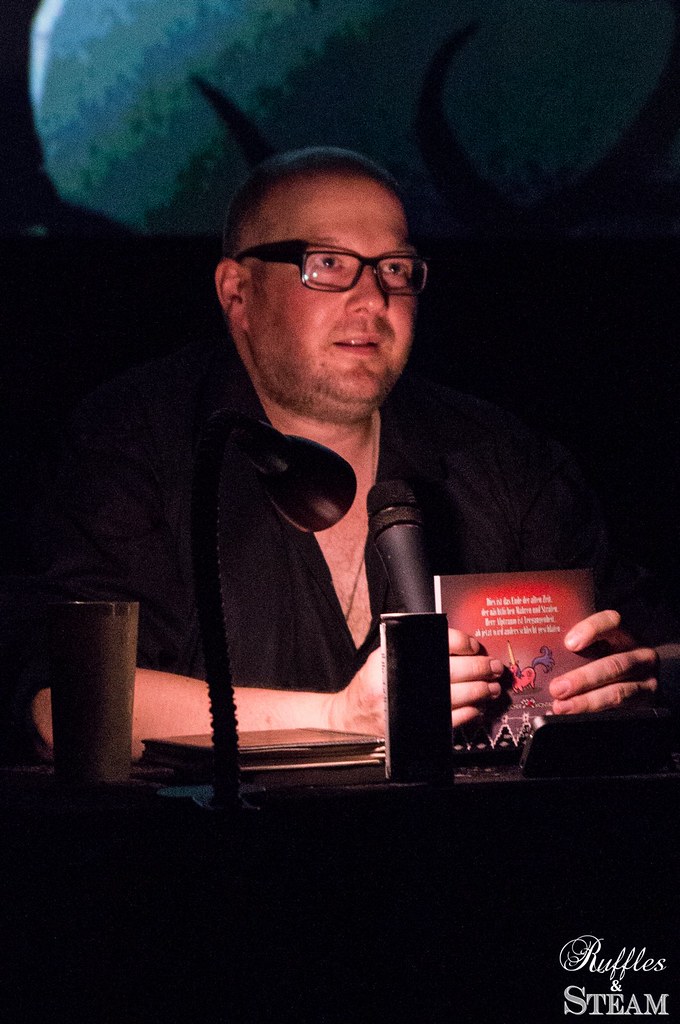 Luckily von Aster himself gave us his spare tickets so me and some other press attendants could get in.
Sadly this wasn't the only time we had problems with the press tickets this year. For example you couldn't use the public transport with the press bracelet. (With the normal WGT bracelet you can.) There should have been an information e-mail stating that which me and some of my friends didn't got. So in the end you had to pay around 25€ extra to be able to do your work! Which I find kind of ridiculous, that's a fourth of the regular price!

Plus there were events during WGT like the open air cinema where you had to pay extra entrance fee as press because they wouldn't let you in with the press pass!

I'm sorry but this is not how you treat the people who make your advertisement!

But well... I enjoyed WGT nonetheless, but those are difficulties that could have been avoided!

On Monday there was another lecture of Christian von Aster and I had the opportunity to interview him (in case you don't know: he's one of my favourite authors so I really enjoyed doing so especially as talking to him is a lot of fun :) ) You can find the German version of the interview at the Clockworker. 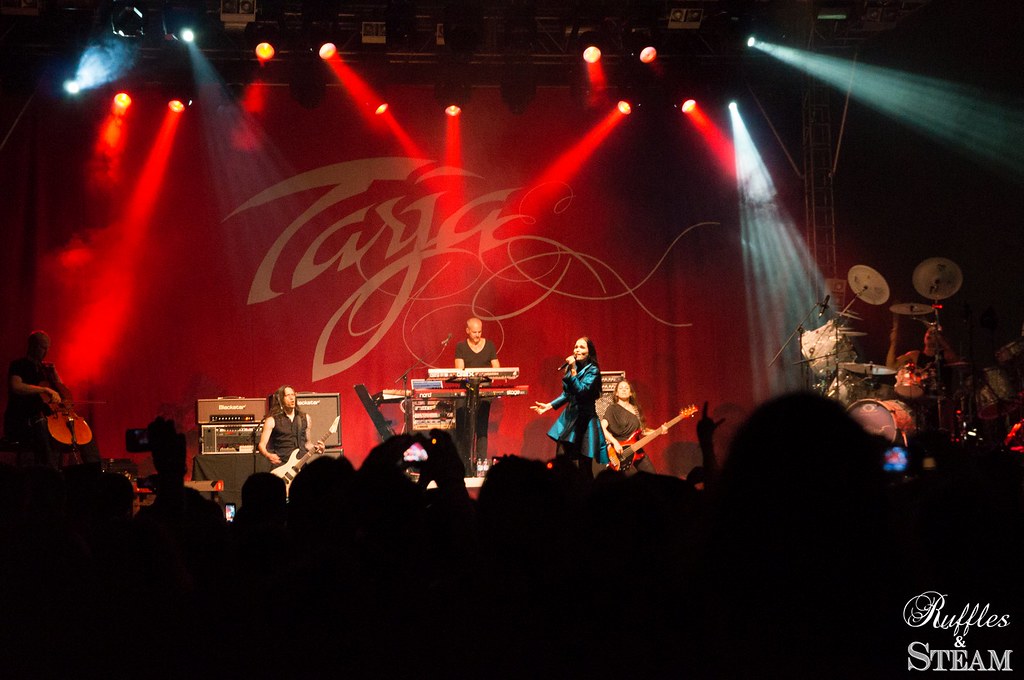 Of course we also went to see some concerts but due to the heat (around 36°C and more) we didn't wanted to go to the crowded halls to often. I ended up seeing only 2 and a half music acts.
The fist one was Tarja Turunen (ex-Nightwish) the other one was Kitty in a Casket which I wanted to see, because I was sure my friends from Austria would be there.  Well, and the half was the band before Kitty, which I mainly heard as we stayed outside or at the sofas upstairs waiting for Kitty. 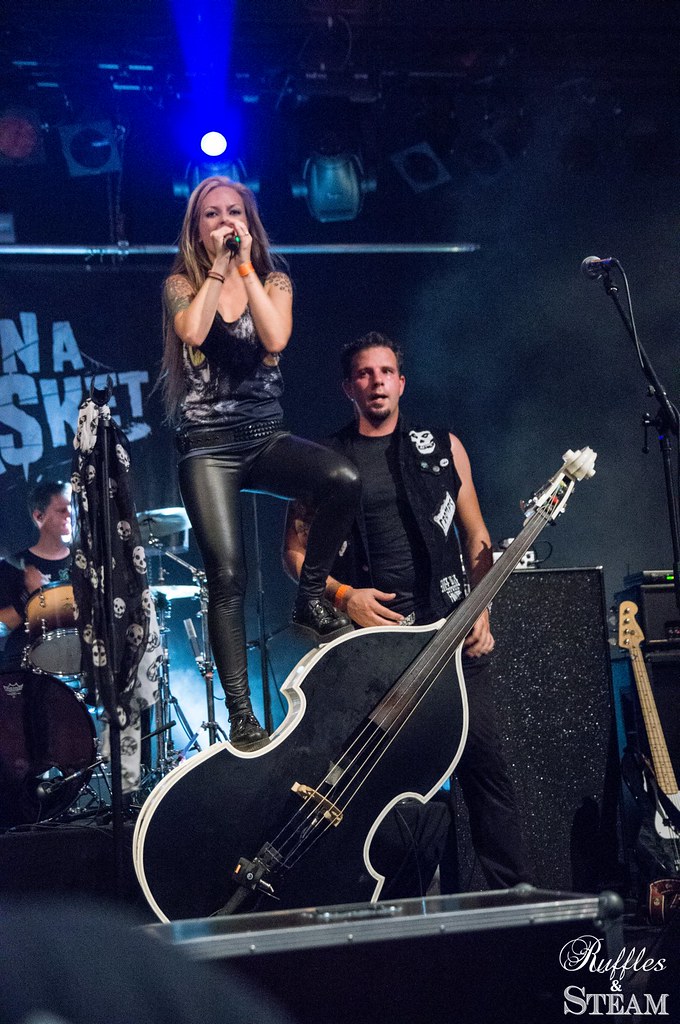 A thing you have to do when at WGT is visiting the agra where is the main shopping hall! Of course we did, mainly in the evenings wearing more comfortable clothes strolling around the Gothic shops. I really liked that there were much more little and individual sellers like my friend Diana-Bianca from Atelier Tausendschön.
Unfortunately there too was the mass of cheap “just-glue-some-gears-on-it”-Steampunk stuff you see everywhere.

All in all I liked WGT this year. The program was good, I met a lot of nice folk. The only problem was the heat! I ended up wearing only half of what I planned because I couldn't bare more then one or two layers of fabric. (Others couldn't, too which ended up with nearly-no-clothes. Unfortunately mostly on people I didn't wanted to see that many skin of >_< but also I have so much respect for those who were still wearing historical gowns and the like!)

We already booked our flat for next year so I hope to see some of you there next time if not earlier.